How do homosexual animals evolve?

Joan Roughgarden, a transgendered professor of biology at Stanford University, has penned a fascinating-sounding book on the evolutionary role of homosexuality called Evolution’s Rainbow. This month’s Seed magazine features a long article on Roughgarden’s theories, which center on explaining why, if homosexuality is a genetic aberration, it hasn’t been bred out of all species — instead, homosexual coupling is more the norm than the aberration when it comes to most animals. As she says, “a ‘common genetic disease’ is a contradiction in terms, and homosexuality is three to four orders of magnitude more common than true genetic diseases such as Huntington’s disease.” 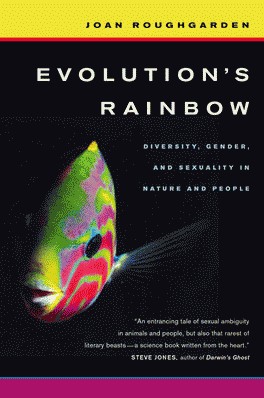 revolves around females, who form intricate dominance hierarchies within a given group. Males are transient. To help maintain the necessary social networks, female macaques engage in rampant lesbianism. These friendly copulations, which can last up to four days, form the bedrock of macaque society, preventing unnecessary violence and aggression. Females that sleep together will even defend each other from the unwanted advances of male macaques. In fact, behavioral scientist Paul Vasey has found that females will choose to mate with another female, as opposed to a horny male, 92.5% of the time. While this lesbianism probably decreases reproductive success for macaques in the short term, in the long run it is clearly beneficial for the species, since it fosters social stability. “Same-sex sexuality is just another way of maintaining physical intimacy,” Roughgarden says. “It’s like grooming, except we have lots of pleasure neurons in our genitals. When animals exhibit homosexual behavior, they are just using their genitals for a socially significant purpose.”

Waterlillies – Tempted – Close To You