The 98 year-old lady who had run-ins with Pancho Villa as a child (the revolutionary didn’t like her dad) and went on to become small business president (circa 1950) and pioneer of the “Tort Chip” has died. Snip from LA Times story: 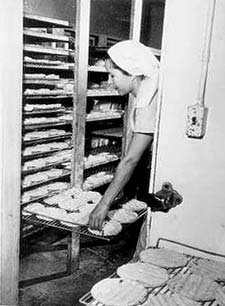 The headline in Popular Mechanics magazine saluted a manufacturing triumph in Los Angeles: “Tortillas Meet the Machine Age.” It was 1950, and the El Zarape Tortilla Factory, among the first to automate the production of tortillas, had used a tortilla-making machine for three years.

Corn and flour disks poured off the conveyor belt more than 12 times faster than they could be made by hand. At first many came out “bent”

or misshapen, as company President Rebecca Webb Carranza recalled decades later, and were thrown away.

Hmmm… were they really bent? Or eBayably imprinted with the virgin Mary’s visage? Link.