This page has instructions for cooking “poached scrambled eggs” — scrambled eggs cooked atop boiling water. Teflon pans can are thought by some to be incredibly toxic when their coating flakes off into the food being prepared in them, so many chefs are switching back to cast iron, copper and other safer materials. However, if you’re accustomed to perfect nonstick-pan omelets, it can be hard to get your eggs cleanly out of a normal pan. This simple method uses a cushion of boiling water to cook fluffy, moist scrambled eggs without any cleanup mess or burning wreckage: 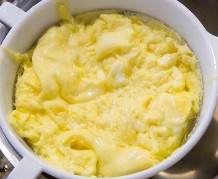 Next, beat the eggs with a fork, but don’t add salt. (The grains of salt will tear the structure of the eggs, causing them to disintegrate on contact with the water.) Let a covered pot filled with about four inches of water come to a low boil over moderate heat, then remove the cover, add a little salt and stir the water in a clockwise motion. After you’ve created a mini-whirlpool, gently pour the eggs into the moving liquid, which will allow them to set suspended in the water rather than sink to the bottom of the pot, where they would stick…

After saying a quick prayer and adding the eggs, cover the pot and count to 20. Almost instantly the eggs will change from translucent to opaque and float to the surface in gossamer ribbons. This all happens very quickly, and by the time you lift the lid, they should be completely cooked.

Update: The toxicity of ingested Teflon is disputed by Dupont.

Update 2: Tim sez, “Though DuPont may dispute health effects, they agreed last week to a voluntary phase-out of these Teflon chemicals. My organization has been leading the fight on Teflon, propelled mostly by internal DuPont documents we obtained that show that they were fully aware of potential health effects after workers at a facility that makes Teflon had children with serious birth defects. The problem with the Teflon chemical is that it has been classified by the government as a “Likely Human Carcinogen,” it never breaks down in the environment, and it has been found in the blood of 99% of newborns in a recent independent Johns Hopkins University study. We found the same thing in our own ‘BodyBurden’ study where we looked for 400+ industrial chemicals in newborn cord blood.”