Xeni Jardin:
Boing Boing reader Kevin Murphy points us to more amazing MP3s of late 19th-century recordings, including what may be one of the earliest bad-girl tunes in audio-recorded history. Kevin says: 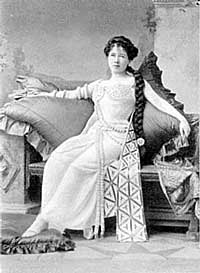 There are four recordings here, the most amusing of which is I’M A NAUGHTY GIRL: Miss Beatrice Hart and Chorus from Daly’s. Berliner 3078, Recorded in London, 18 January 1899.

It’s a bit scratchy at first, but the full lyrics sheet is here: Link.

As an extra note, the song makes an appearance in “The Boarding House,” chapter 7 of James Joyce’s “The Dubliners,” circa 1914: Link. Something Cory especially might be interested in, as an example of the time when authors could quote popular song lyrics in their stories without being hounded by packs of rabid ASCAP lawyers.

MP3 Link to “I’m a Naughty Girl.” Here’s more about “A Greek Slave,” the risqué little musical comedy in which this song appeared: Link.

MP3 of 1878 recording on lead cylinder