In today’s NYT, a fascinating interview with “father of acid” (and pal of Timothy O’Leary) Albert Hoffman, who turned 100 this week. 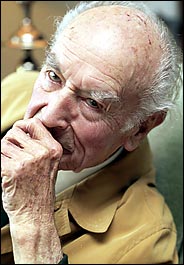 His work on ergot produced several important drugs, including a compound still in use to prevent hemorrhaging after childbirth. But it was the 25th compound that he synthesized, lysergic acid diethylamide, that was to have the greatest impact. When he first created it in 1938, the drug yielded no significant pharmacological results. But when his work on ergot was completed, he decided to go back to LSD-25, hoping that improved tests could detect the stimulating effect on the body’s circulatory system that he had expected from it. It was as he was synthesizing the drug on a Friday afternoon in April 1943 that he first experienced the altered state of consciousness for which it became famous. “Immediately, I recognized it as the same experience I had had as a child,” he said. “I didn’t know what caused it, but I knew that it was important.”

When he returned to his lab the next Monday, he tried to identify the source of his experience, believing first that it had come from the fumes of a chloroform-like solvent he had been using. Inhaling the fumes produced no effect, though, and he realized he must have somehow ingested a trace of LSD. “LSD spoke to me,” Mr. Hofmann said with an amused, animated smile. “He came to me and said, ‘You must find me.’ He told me, ‘Don’t give me to the pharmacologist, he won’t find anything.’ ”